Is a song written by Saiful Bahari. The lyrics :


This song is definitely NOT for Zuraida Kamaruddin. 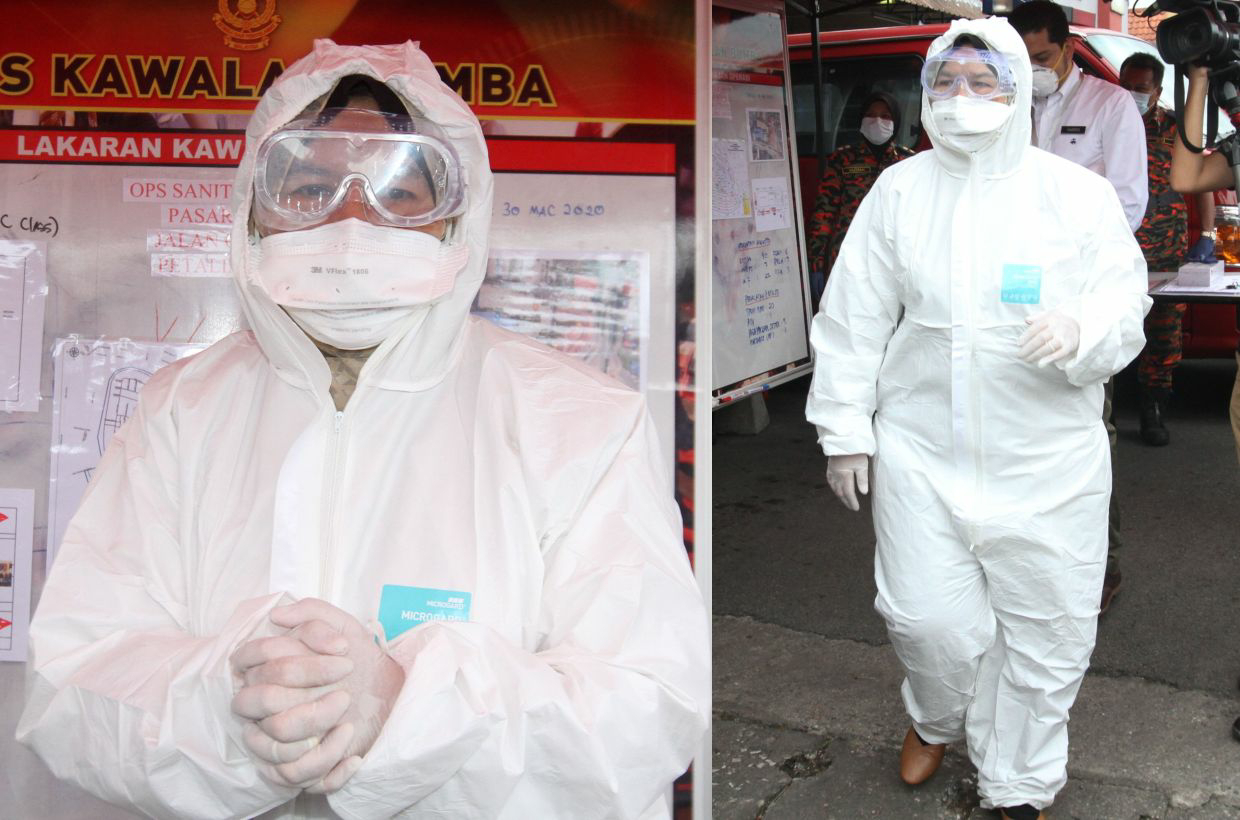 Below, look at our majesty🇱🇷, leading our nation🇱🇷, helping in practical ways. He has shown leadership, at a time none of the politicians are capable of doing so. 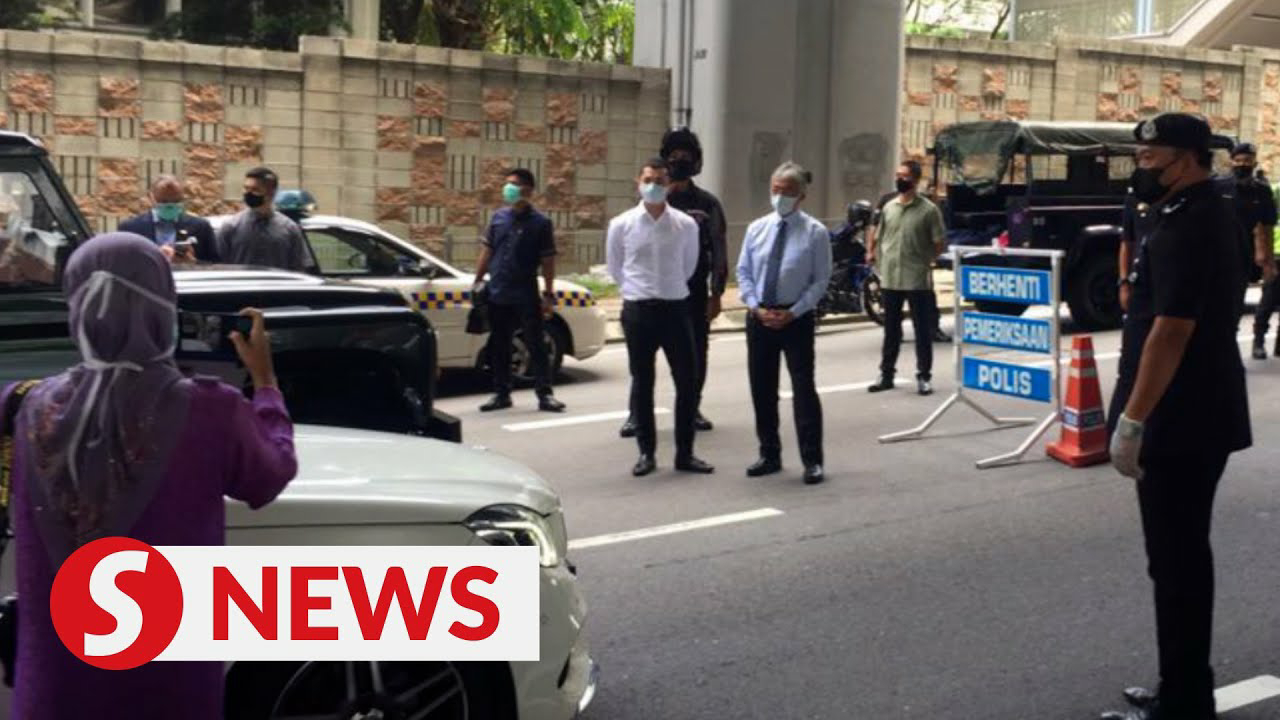 Its so sad, spacemen suits , waste of public funds, doraemon. .this is the quality of PM8 and his cabinet. Expect some ministers, who can sence the ship might kaput, to....🧚‍♀️🧚‍♂️🚣‍♂️🚣‍♀️

Posted by NuclearManBursa at 16:36 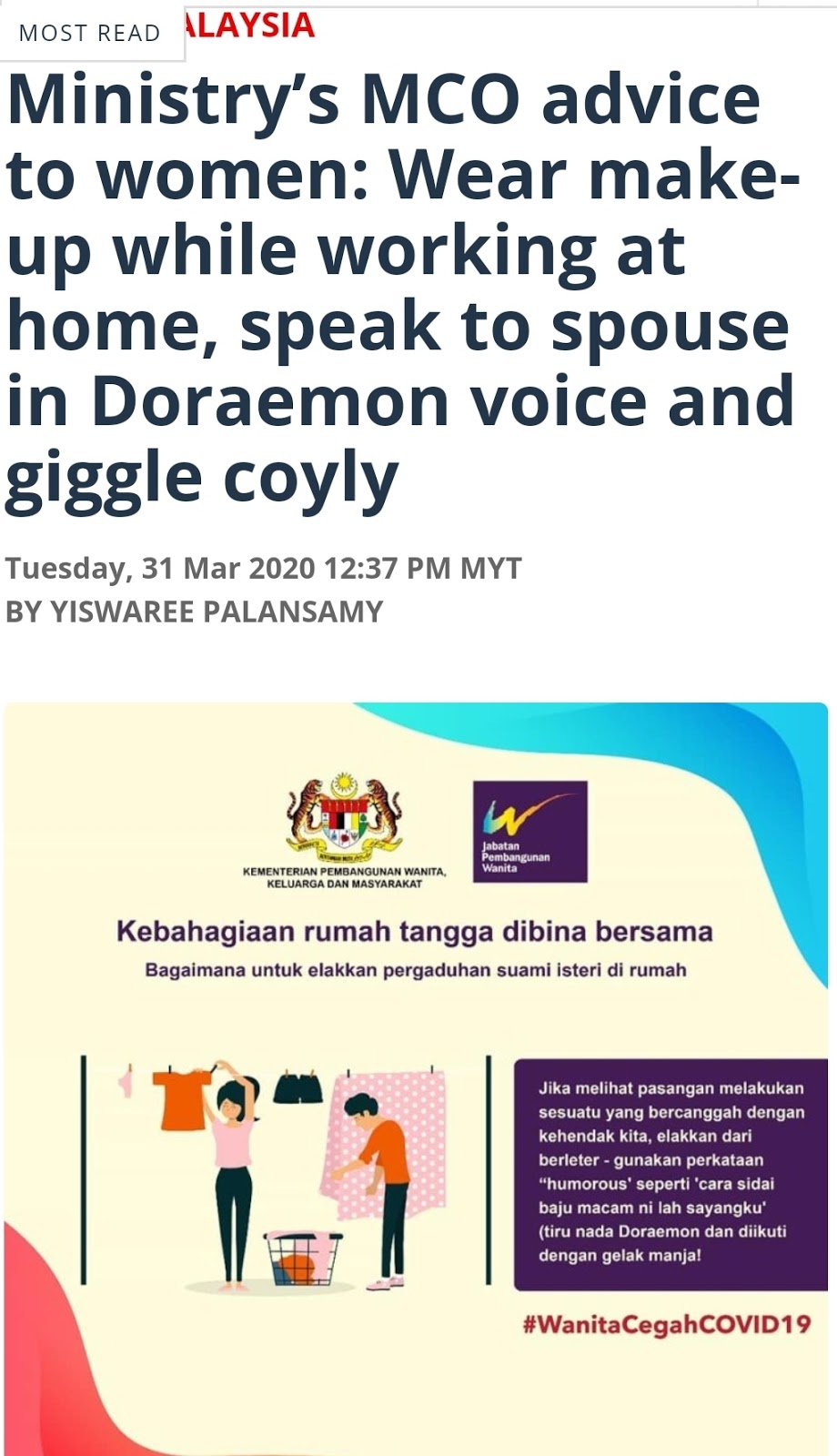 Najib Razak, you have to come back to save Malaysia coz  PAS people and BERSATU people  are making us laugh too much. PS, can Dolly talk like Doremon?
Posted by NuclearManBursa at 03:16

is the 2016, single  from the album of the same name by heavy metal band Metallica. 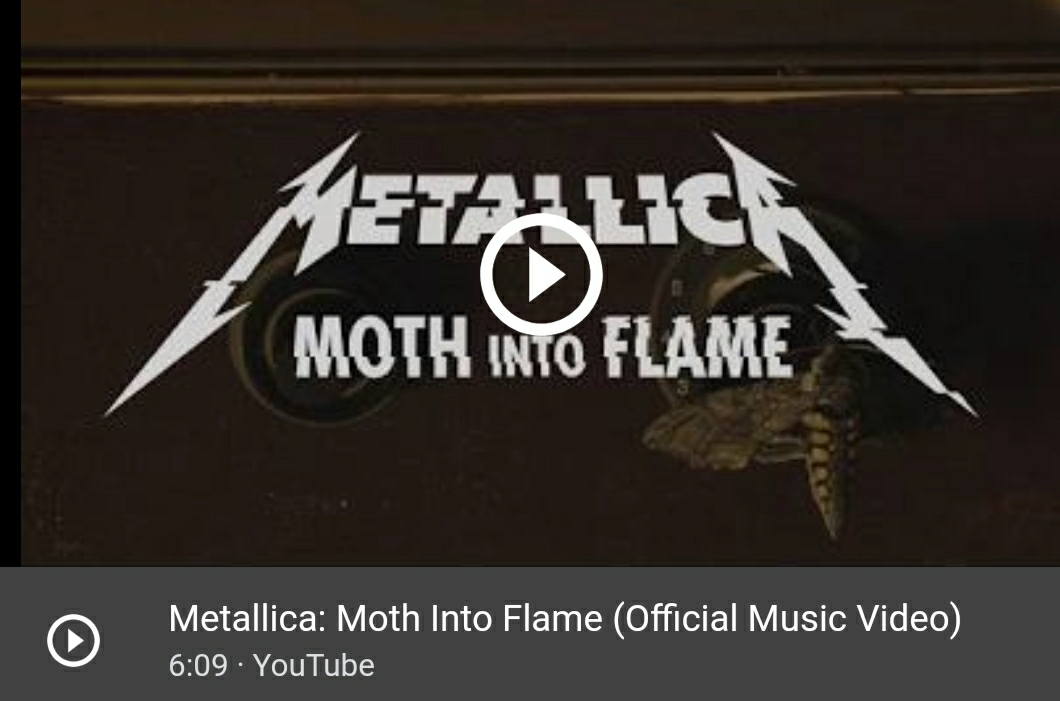 The lyrics to the song goea something like this :
Infamy all for publicity
Destruction going viral

Light it up ah, light it up
Another hit erases all the pain
Bulletproof ah, kill the truth
You're falling, but you think you're flying high
High again
Below is an article in the NST on Zuraida's🤣🤣🤣🤣🤣 covid 19 🤦‍♀️ effort .

KUALA LUMPUR: It is highly crucial that all personnel carrying out Covid-19 cleaning and disinfection operations nationwide to be properly informed and trained on sanitisation procedures.


Otherwise, medical experts say, the move is merely a waste of resources.

Former deputy Health director-general Prof Datuk Dr Lokman Hakim Sulaiman said he was perplexed upon seeing a recent video clip of a disinfection operation, where a solution was sprayed onto road surfaces.

He explained that authorities should instead disinfect frequent touch-points, such as doorknobs, lift buttons, and escalator railings to curb the spread of Covid-19.

“What are they (the personnel) doing? Who is advising them? (It is) truly a waste of money. How are the roads and road curbs being contaminated? By infected people coughing onto them en masse?

“On what basis or evidence are they doing that (disinfecting roads)? Yes, they might say that they are following the standard operating procedure (SOP), but who prepared the SOP and who endorsed it?

"And look at the crowd (observing the operations). This publicity bliss is already putting many people at risk,” he said.

He stressed that the best way to “nyah kuman” (disinfect) is to stay at home.

“What a waste, the money spent could well be used for other more meaningful purposes, for example, for hospital staff who are preparing their own Personal Protective Equipment (PPE),” he added.

Earlier this morning, Housing and Local Government Minister Zuraida Kamaruddin, along with the ministry’s personnel, carried out a public disinfection operation at a wet market in Jalan Othman.

She was seen surrounded by personnel in face masks and members of the public.

In another 1 minute 19 second-long clip shared on Facebook, a man in PPE can be seen spraying the disinfectants at shop lots, while seated on top of a moving truck.

He said disinfection should be more targeted where contamination is most likely to have taken place, such as areas where hands are likely to come into contact with the virus.

“(Spraying roads) may even be a waste. Personnel should be trained to disinfect places where (droplets containing the virus) are likely to fall and be the source of infection. Not roads.

“From the photo (where personnel were spraying roads), it appeared that they are washing the road. I hope there was no aerosol created with the jet of water used and people mingling around as shown,” he said in a WhatsApp reply to the New Straits Times today.

“What is this? Is this effective (in killing the virus)? Or is it a mere waste of resources and disinfectants, besides creating a false sense of security?” he wrote.

Zuraida had earlier said the Fire and Rescue Department’s hazardous materials team (Hazmat) would carry out disinfection at high-risk locations in the country.

The NST has reached out to the Health Ministry for comments on the matter.

Posted by NuclearManBursa at 14:33 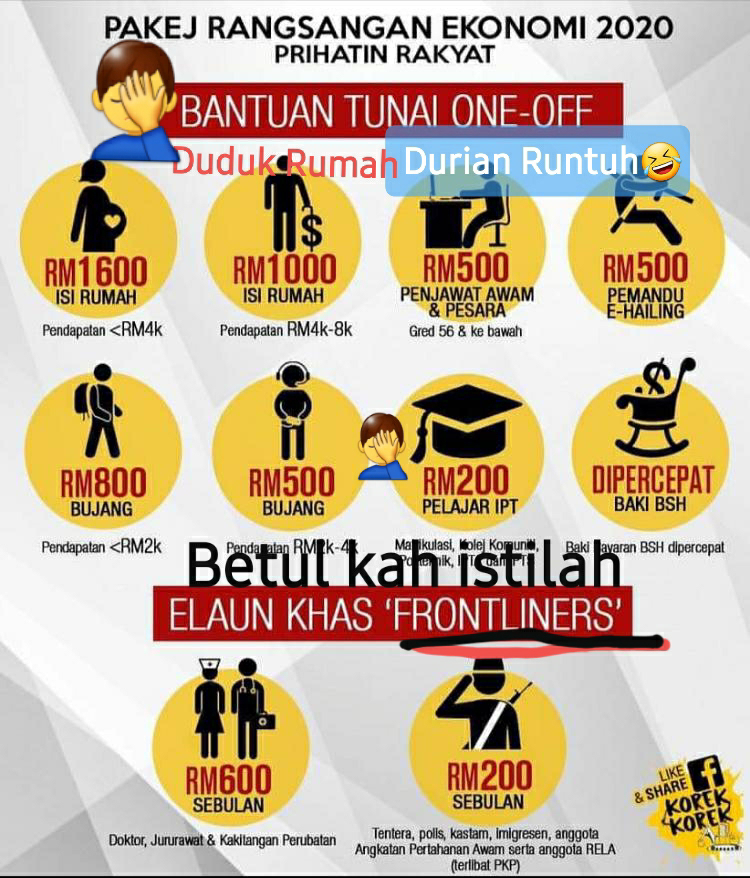 A song from Josh Dies. Wee ka siong, the lyric is

You're so stupid, you make no sense
You're so dense
You're unintelligent, irrelevant with no self-defense 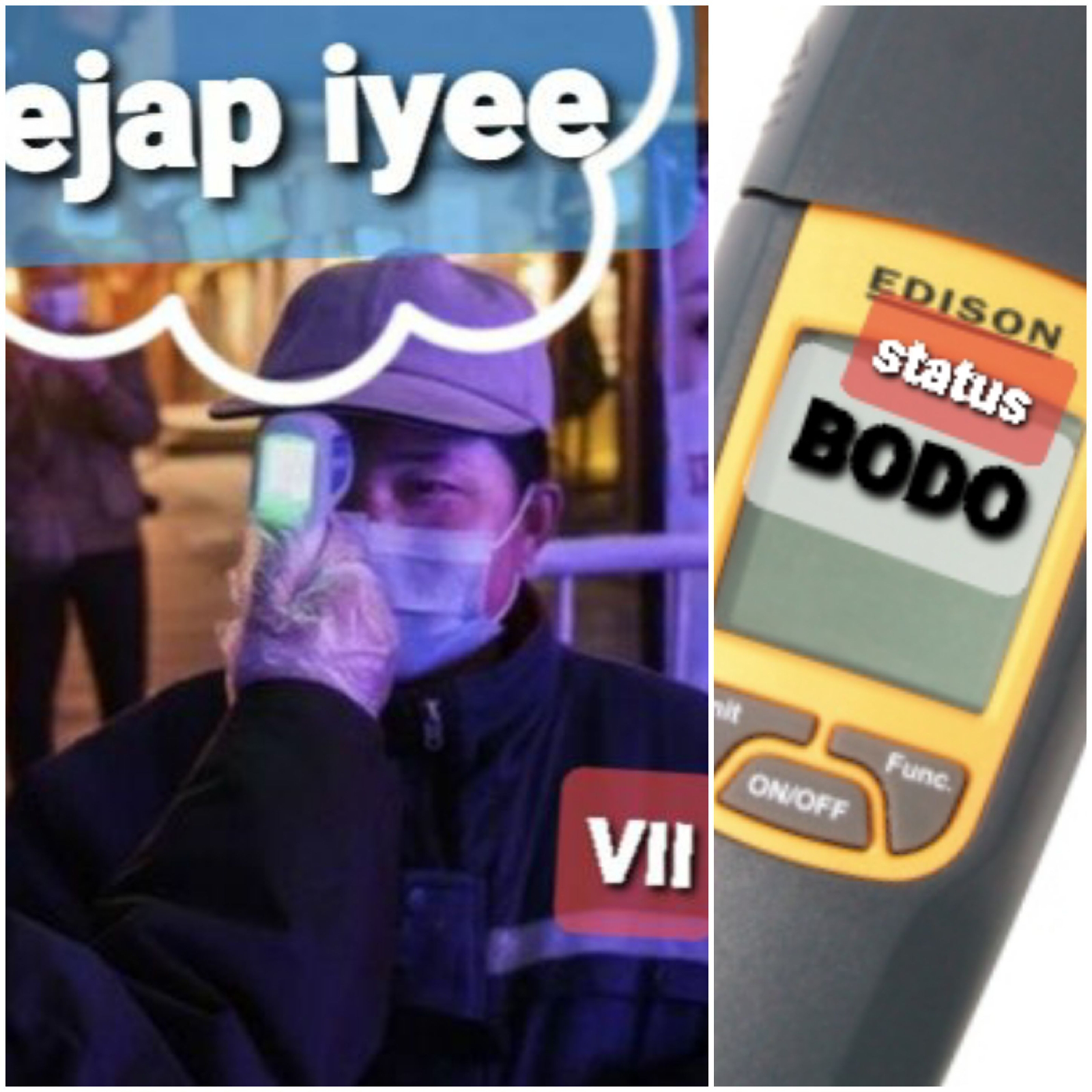 Read what UTM graduate has to say in the STAR

Wee: Ports are being cleared

The Transport Minister said Port Klang had reduced its congestion from nearly 100% to an estimated 40%.

“Port of Tanjung Pelepas has also been given the green light to move their containers out to allow continuing export and import activities, ” he said on his Facebook yesterday.

Owing to the movement control order (MCO) and social distancing practice, Dr Wee had a briefing via video conferencing with officers from the Port Klang Authority and port operators.


Again let me repeat the lyrics :

You're so stupid, you make no sense
You're so dense
You're unintelligent, irrelevant with no self-defense


And why am i repeating,well because  " Owing to the movement control order (MCO) and social distancing practice, Wee had a briefing via video conferencing with officers from the Port Klang Authority and port operators.

So can all factories open to receive this goods....if yes that means no more MCO?  From the looks of your statement today,  you are NOT a bright child.
Posted by NuclearManBursa at 22:31

Was a hit for Raja Ema in 2007 from the  album titled memori hit. Yup the rakyat just got HIT as we are going to fund and then pay the bulk of PM8' s RM250 billion Covid 19 stimulus  plan.

The KENYATAAN or the fact here is EPF may well end up funding up to RM200 billion which comes up to about 20 per cent of EPF strength,  based on  Tun Mahathir, statement that the fund has more than a trillion in cash (our money lah)
Well all this was announced in February by Tun M. 🙄😂🤣👇
https://www.thestar.com.my/business/business-news/2020/02/27/highlights-of-stimulus-package. 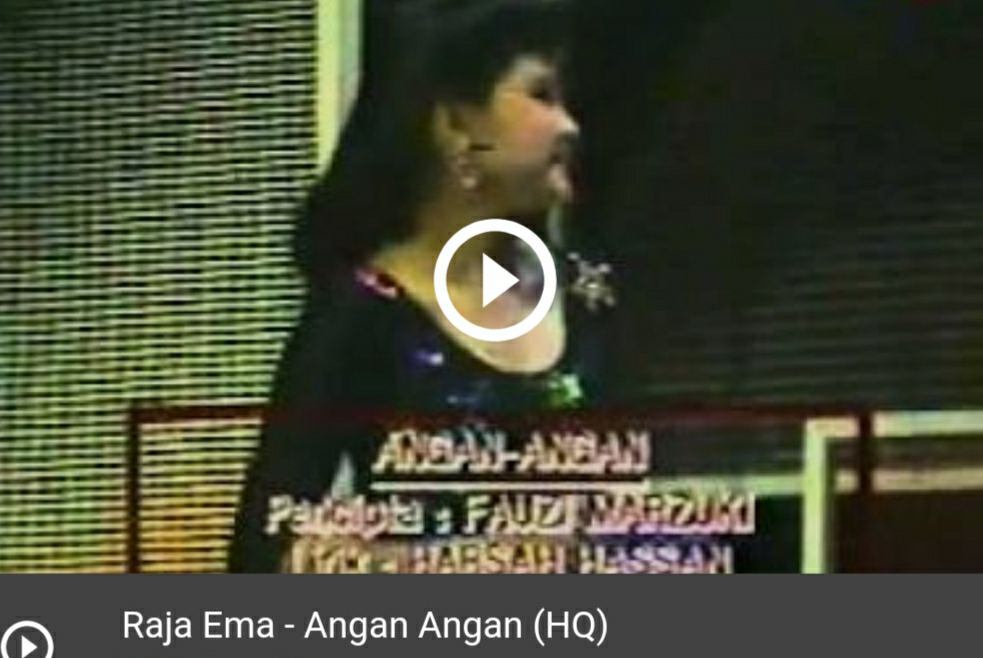 What this means is the public money is FUNDING almost  everything 🤣🤣🤣🤣

Will RM10 billion in BRIM now, result in RM50 billion danajamin bonds doing a David Copperfield.? Only time will tell...for now Malaysians can merely watch PM8 angan angan and hope it doesnt turn out to be yet another *mimpi buruk*

Posted by NuclearManBursa at 08:50

Was a minor hit for rock group FTG in 2013 from the album Aku Tak Peduli. 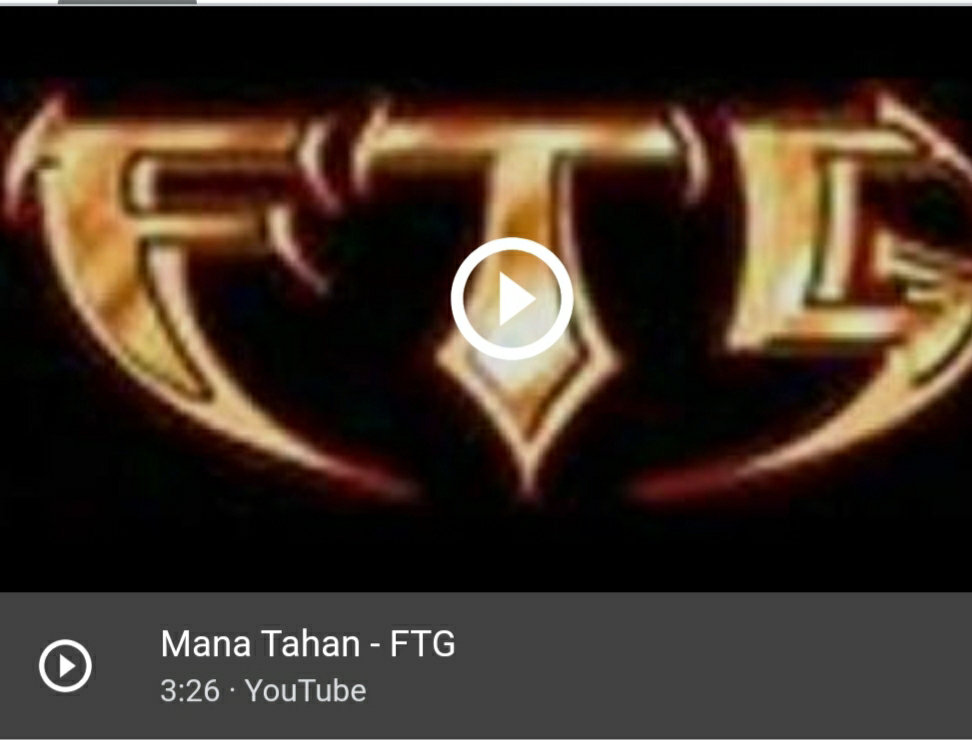 Was a very minor hit for M Nasir.  Nevertheless, the lyrics to these song says it all about PM8, latest Covid 19 plan. 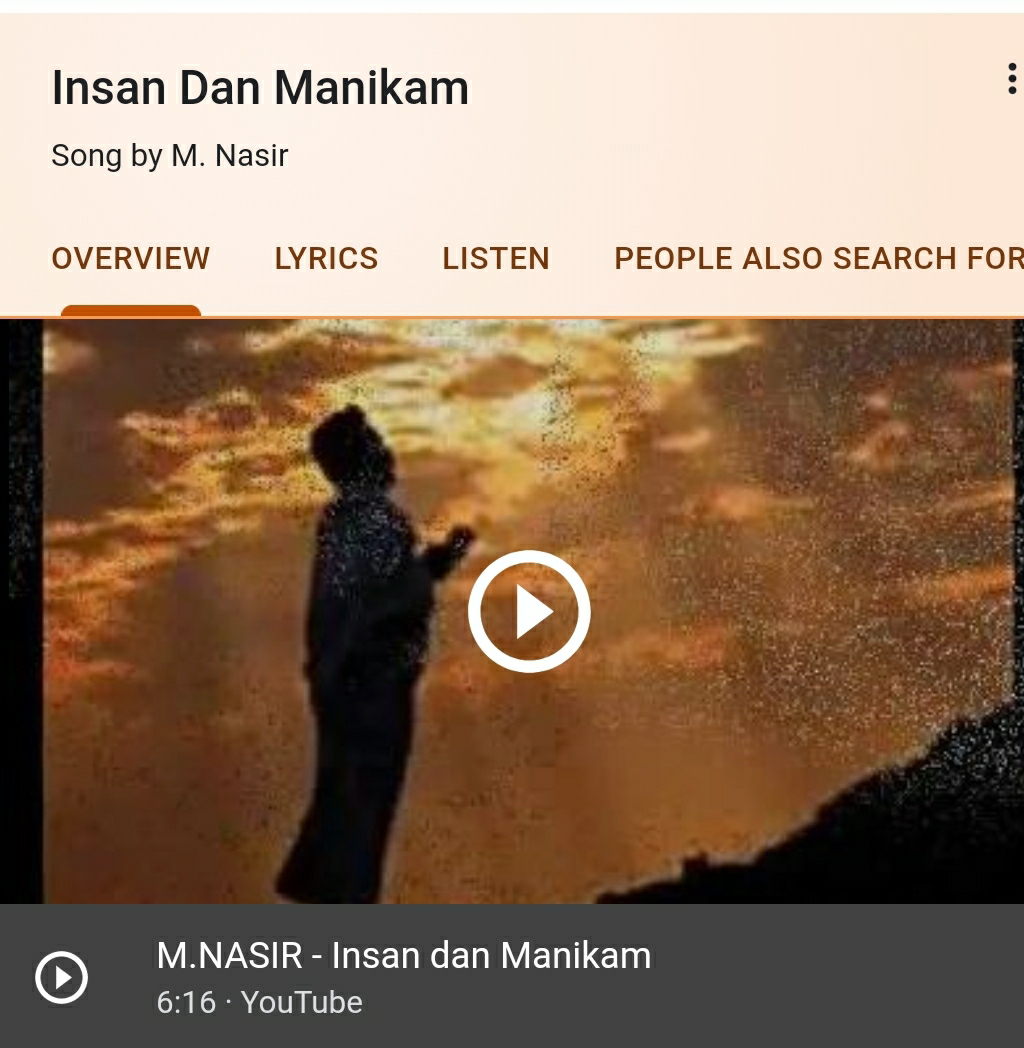 Let's start with the RM130 million to each state? 🤣 well what it means is the PN controlled Perlis with a population of about 250, 000 people will be getting RM511 per head, while the Perak🤗🤦 controlled PN state with a population of 2.5 million people will be getting RM52 per head.  Go figure.. read the lyrics on insan & manikam :
Ya insan yang hadir
Dengarkan semua
Ku isytiharkan dengan hati terbuka
Ya insan yang daif
Insaflah semua
Manikam yang di sangkakan
Bukan yang asli
Hanya seiras dan serupa
Ya insan yang hagas
Awasilah semua
Maya yang indah
Ada kudisnya
Jangan terpedaya
🤣👉 Also the EPF withdrawal is going to create a mass gathering of people. My advance condolences to EPF staff

Posted by NuclearManBursa at 23:41

Is a song by the Dutch Grunge band Rotfield. Lyrics to this song goes something like this

is a single from Tones and I from her new album of the same name.
Looks like PM8, has been a "bad child", with almost minimal coverage on what's he been up to over the past two days.
It seems the civil service, long maglined is the one holding the nation with their professionalism.
Malaysia has been slammed with lower oil prices, with the Saudi's selling it USD25 per barrel. We have the highest Covid 19 cases in South East Asia and the Ringgit is at RM4.28 to the USD . The peg at RM3.80 now seems like the good old days.
PM8 & his motely cabinet, which incidentally thought its okay to exclude UMNO's Mohamad Hassan but include Anuar Musa... stop being invisible . Get to work and stop singing *bad child*  (LYRICS: 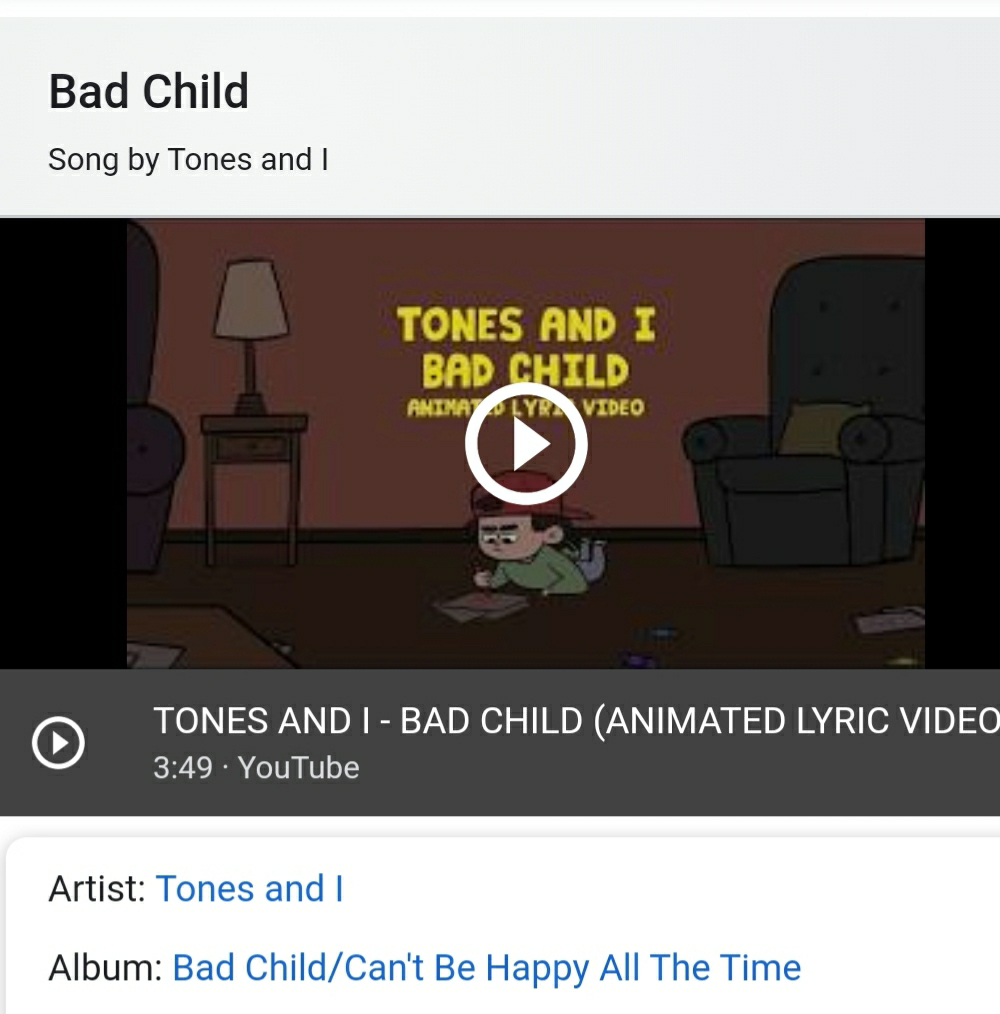 Posted by NuclearManBursa at 01:39 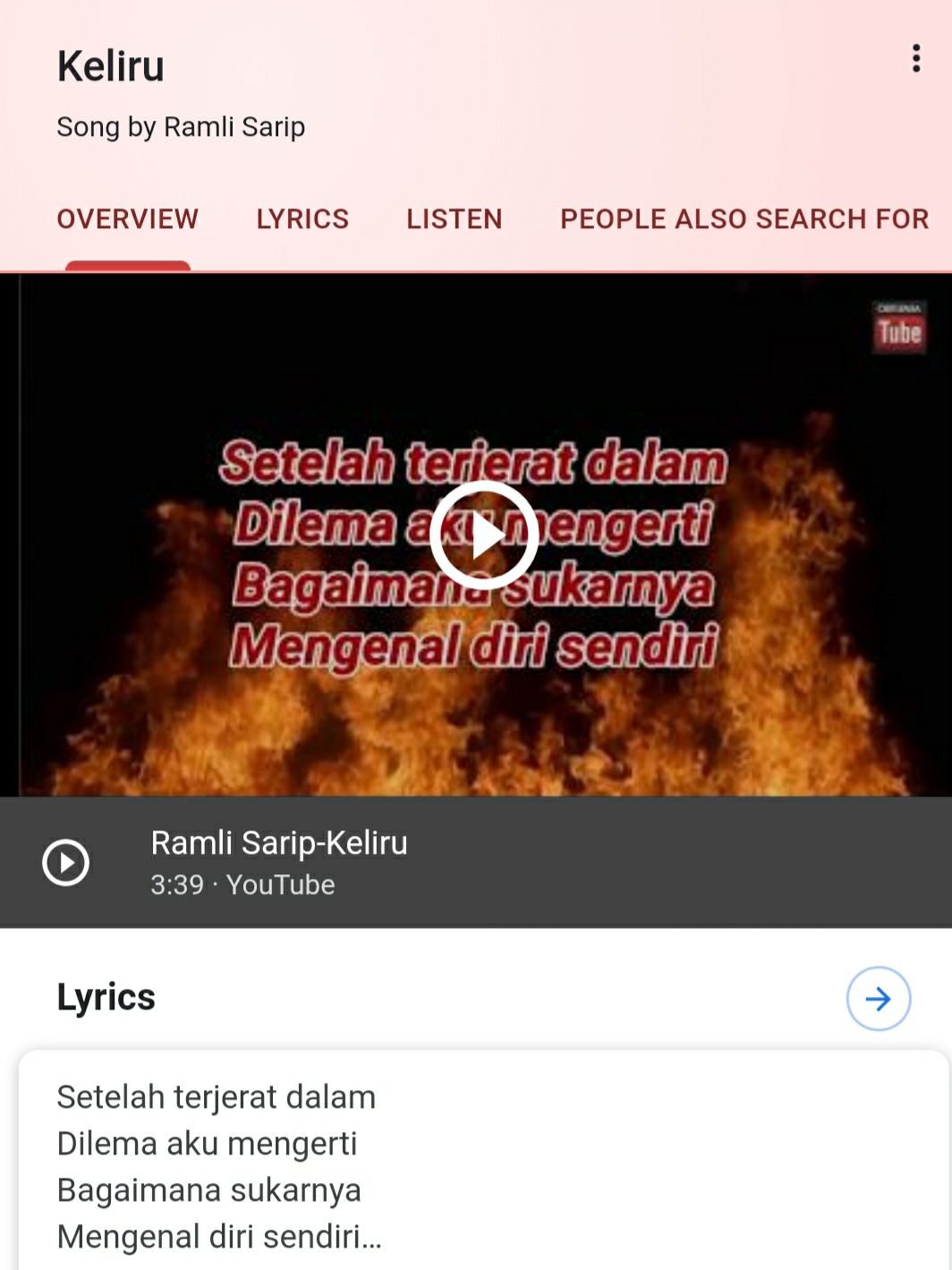 Was a hit for Culture Club. The lyrics to this song goes something like this :
People fill the world with narrow confidence
Like a child at birth, a man with no defence
What's mine's my own, I won't give it to you
No matter what you say, no matter what you do
Sounds familiar? Well now that we have the 8th man to helm the nation, will it be a bed of roses in the ruling coalition?
Is Malaysia big enough for three peninsular based Malay parties to running the country? Will UMNO want their man to be PM in the next GE?
Will PAS be satisfied playing second fiddle to UMNO. Where will BERSATU candidates be standing in the next GE?
For all said and done, even when UMNO was in the opposition it sticked to the Barisan National spirit and allowed MCA to stand in the Johor by election.
My guess is, it will take six months before the reality sinks in. And with that the first target will be the budak pandai yang selamatkan UMNO dari todak.
The least of the worries is Pakatan Harapan...as they say  the enemy of my enemy is my friend.... 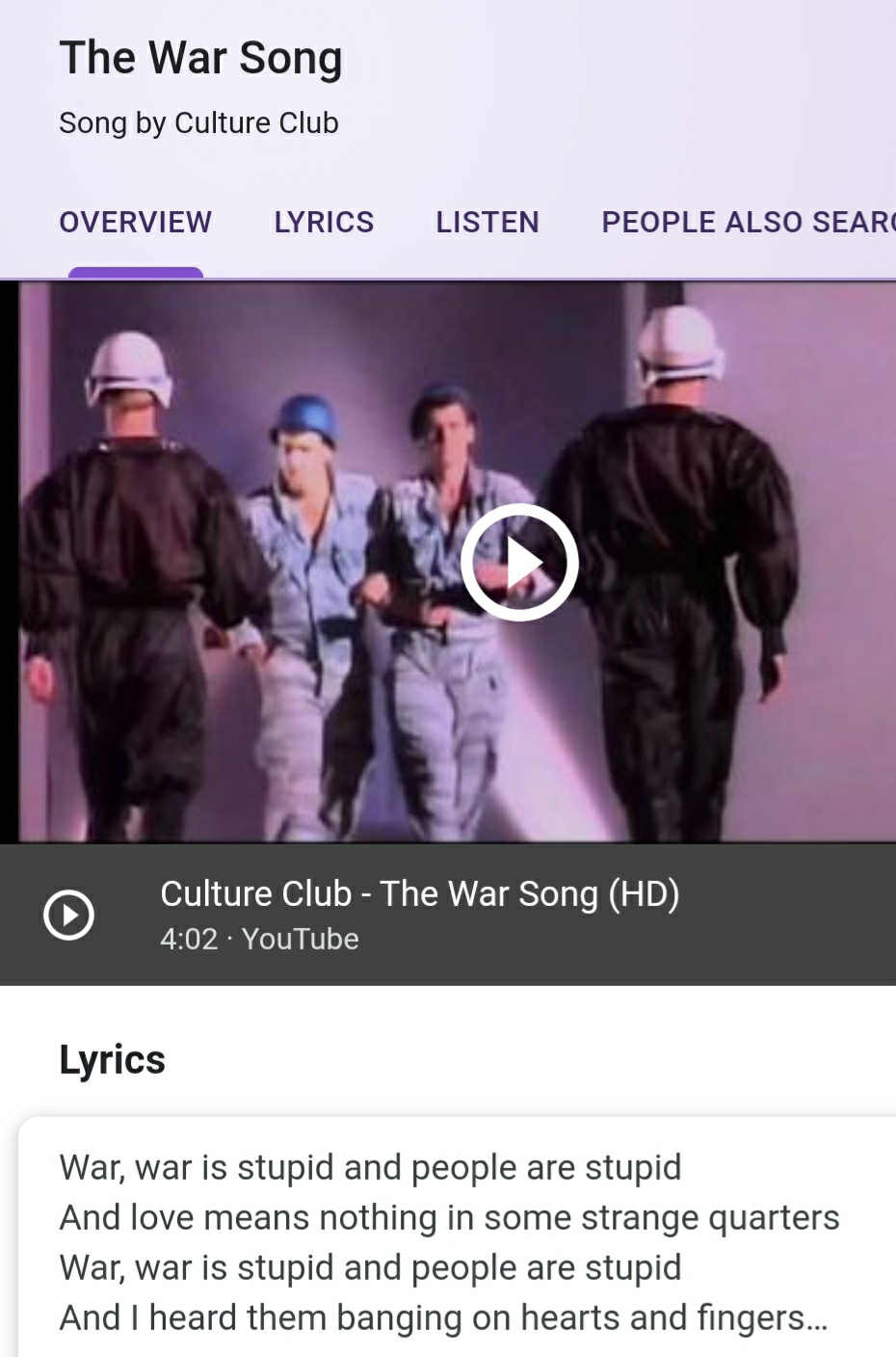 Posted by NuclearManBursa at 03:26